A decade before Reservoir Dogs, the iconic gangster outfit consisting of a black suit, skinny tie and a pair of Ray Ban sunglasses was introduced in the early eighties musical comedy The Blues Brothers. However less violent in their actions than Tarantino‘s look-alikes, the protagonists also succeed in leaving a trail of mayhem wherever they go.

Dan Aykroyd and John Belushi made their first appearance as The Blues Brothers on Saturday Night Live in 1976. Soon after they formed a blues band, went on tour and sang their way into stardom. Their success inspired Aykroyd to write a screenplay about the brothers for a movie that John Landis would direct. Fresh out of jail, Jake (Belushi) and his brother Elwood (Aykroyd) pay a visit to the orphanage where they grew up and first got in touch with the blues. The nun in charge, referred to by the brothers as The Penguin, informs them that the orphanage will be closed unless 5000 dollars of tax money is payed.

Not sure how to get that amount of money in a legitimate way, the men stumble into a church where no one less than Mister James Brown is preaching and singing. Inspired by the gospel by reverend Brown and his animated choir, Jake has an epiphany and decides to get the band back together in order to raise the five grand. A running gag through the entire movie is Elwood trying to get away with their actions by stating they’re on a mission from God.

Reforming their band doesn’t turn out to be that easy since several band members took on a steady job after Jake’s temporary relocation to prison. In one of the most amusing scenes in the movie, the Blues brothers order some dry white toast and four chickens and a coke in Aretha Franklin‘s soul food restaurant and eventually succeed in convincing her husband to rejoin their band. Also they successfully persuade the maitre d’ of a fancy restaurant to rejoin their band after annoying several customers at the dinner table and threatening to return every day untill he changes his mind. With the band back together it’s time to buy some instruments at the music store owned by no one less than the ever smiling Ray Charles. SInce the brothers are nearly penniless all instruments are, as usual, payed with an IOU.

Desperate for money and without any gigs in the pipeline, the band pulls over at a bar and pretends they’re the country and western band that’s supposed to perform there that night. After their performance which inspires the audience to throw beer bottles at the band, they run off and are chased by The Good Ol’ Boys, whose place on stage they stole.

In a final attempt to raise the necessary money the brothers organize a gig in the Palace Hotel Ballroom, more than 100 miles outside their hometown Chicago. Considering their problems with the authorities, arriving on time at their own show isn’t exactly a walk in the park. The Blues Brothers performing on stage

Baffled by their performance of the evergreen Everybody Needs Somebody, a music manager offers the Blues Brothers a prepaid record deal. After their escape from the backstage they flee to the tax office while being pursued by by the police, a country and western band, a mysterious woman with a bazooka and a group of neo-nazi’s. However they never seem to lose their cool. While being hunt down they succeed in annihilating no less than 103 cars, which was the record for most wrecked vehicles in a movie at the time. Carrie Fisher firing a gun at the brothers.

The anonymous kill frenzy woman, portrayed by Carrie Fisher aka Princess Leia from Star Wars, turns out to be Jake’s ex fiancée bound for vengeance. After making amends the brothers are able to escape to their car and move on.

Upon their arrival at the tax office and after delivering the check for the orphanage the brothers are taken into custody and so their journey ends where it started, in prison where they conclude the movie by performing Elvis‘ Jailhouse Rock.

The movie aged well and remains entertaining after all those years. The chemistry between Aykroyd and Belushi is unique and their reluctance to take off their hats and sunglasses makes their characters stand out as movie icons. After John Belushi’s tragic dead Aykroyd tried to revive the epic brothers in Blues Brothers 2000 but the sequel misses the spark that the original movie still has. 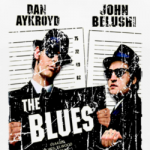