Who are the most frightening villains in movie history? Are psychopaths Anton Chigurh from No Country For Old Men, Batman’s nemesis The Joker and Dr. Hannibal Lector in The Silence of the Lambs the first names that come to mind? No, aforementioned characters are all human and do sometimes feel a small amount of pity for their victims and even have a certain sense of justice in them.

The most evil bad guys in cinema on the other hand are inhuman threats like the blob, the liquid terminator or HAL 9000; the artificially intelligent computer from 2001: A Space Odyssee. They can’t be bargained with, they can’t be reasoned with and they won’t stop untill they are stopped. One of the latest additions to this sinister company is Robert, a lonesome car tire that becomes self aware and embarks on a ruthless killing spree, for no reason. Rubber is the second feature film by French director Quentin Dupieux who also composed the soundtrack as his alter ego Mr. Oizo, together with Gaspard Augé from the electronic band Justice. Dupieux is known for directing the Levi’s commercial in the late nineties in which the yellow puppet Flat Eric is fleeing the police together with his companion Angel.

This absurd horror movie is set in a desolate dessert and starts with a car slowly yet deliberately running over a dozen of chairs. A police officer (Stephen Spinella) steps out of the trunk and addresses the camera, saying that many actions in great movies happen for no reason and this is also going to be the case in this movie. On panning out we notice the speech was meant for a live audience who are about to see the movie through a pair of binoculars. On several occasions throughout the film the crowd will express their opinions on the occurrences in the movie. A rubber tire suddenly rises from the sand.

A tire lying in the sand slowly starts to move and ultimately manages to stand up straight. After a number of attempts to roll, the tire succeeds in moving without falling over. As it finds an empty plastic bottle on its way, the tire decides to run it over and crushes the can. The same occurs when the tire meets an unfortunate scorpion. On encountering a glass beer bottle, running it over doesn’t break the bottle so the tire switches to plan B. The car tire starts shaking and his telepathic powers leave the bottle shattered to pieces.

After exploding a peaceful rabbit and a dining raven, the tire needs a new challenge and starts hunting people. He tries to kill a woman in a car driving by but his powers only affect the car’s engine which starts to stutter. While approaching the car, the tire is run over by another vehicle and the woman is able to drive on. Bent on revenge, the tire meets his attacker at the nearest gas station and makes his head explode. Robert the tire then follows the woman to the nearest motel where she catches him peeking through the door that was left ajar as she’s in the shower. After she kicks him out, he enters the room next door and watches tv. When the maid spots the tire taking a shower she throws him. The motel owner’s son sees the tire enter the room and discovers the housemaid’s decapitated body. When the police arrive to investigate the murder no one believes the boy but eventually they set up a plan to destroy the bloodthirsty tire after it has gone on a rampage. Robert the tire is confronted by the police

The cast consists of several unexperienced actors amongst which French model Roxane Mesquida but also features Stephen Spinella from Milk and Lincoln and James Parks who plays minor roles in Quentin Tarantino‘s The Hateful Eight, Django Unchained and the two Kill Bill movies. While the concept of the movie is very original and amusing and the cinematography is visually appealing, the movie is way too long. Dupieux could have made a magnificent short film instead of this monotonous feature film of 90 minutes in length. 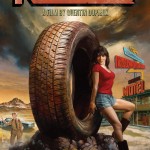