English film director Alfred Hitchock made Psycho in 1960 when he had nothing left to prove. He already was the respected director of classic thrillers like Dial M for Murder, Vertigo, Rear Window and North By Northwest but wanted a challenge when he decided to film an adaptation of the novel Psycho by Robert Bloch. This black and white film is one of Hitchcock’s best and is seen as the classic horror movie and the founder of the slasher genre. Marion is trusted with a large amount of cash

When Marion Crane (Janet Leigh, mother of Scream Queen Jamie Lee Curtis) decides she wants to take her casual relationship with her lover Sam Loomis (John Gavin) to the next level, money or the lack thereof seems to be an issue. At work later that day she is trusted by her employer to bring 40,000 dollars in cash to the bank.

Marion suddenly feels ill and leaves the office early that Friday afternoon. As she does not show up for work the next Monday her boss is alarmed and recalls seeing her driving out of town last Friday afternoon. Fleeing with the money made Marion feel sleepy so she takes a nap along the road. A police officer takes notice and follows her as she drives to a garage. There she trades her car for another one and pays 700 dollars in cash, much to the surprise of the car salesman and the policeman.

After driving through dark and rainy weather for a while Marion halts at an empty motel. She is welcomed by a friendly young man by the name of Norman Bates (Anthony Perkins) who invites her to have dinner with him. In Bates’ office the two talk about the stuffed birds in the room which Norman made himself as an amateur taxidermist. He also tells Marion about his sick mother who can’t leave the house and doesn’t like him hanging around the customers. When Norman leaves he peeks through a hole in the wall to see his only visitor undress and prepare to take a shower.

The murder in the shower scene The death scream in the shower

Ask anyone who has or has not yet seen the movie what Psycho is about and they will respond by describing the murder in the famous shower scene. Actress Janet Leigh even stopped taking showers for a while and switched to taking baths after filming the scene.

As Marion is in the shower an unidentified person suddenly enters the bathroom. We hear the famous scary staccato strings as the killer opens the shower curtain and stabs the main character to her death. After the murderer leaves the cabin we see Marion collapse and blood flowing down the drain.

A silhouet is seen entering the bathroom

Moments later Norman Bates arrives and very calmly he cleans the crime scene and wraps the victim in the shower curtain she ripped off whilst falling down. He lays the body in the trunk of her car and pushes the vehicle in a dirty swamp pool to watch it slowly sink.

The search for Marion

Surprised by the disappearance of her sister, Lila Crane (Vera Miles) and Sam hire a private investigator (Martin Balsam) to pinpoint where she is. As detective Arbogast methodically visits all motels in the vicinity he stumbles upon Bates Motel and its weird host who at first denies having seen Marion. Although she used a pseudonym, the detective recognises her handwriting in the guestbook and this suddenly refreshes Norman’s memory. The psycho killer attacks the detective

The detective knows he’s up to something and calls Lila to inform her he knows where her sister spent the night. Intrigued by the eccentric mother, the Arbogast enters the house and as he walks up the stairs a person holding a knife runs out of a room and stabs him to death.

This scene is filmed from above so you can’t identify the murderer. Since Lila and Sam don’t receive any news from detective Arbogast they summon deputy sheriff Chambers who informs them that mother Bates died more than ten years ago and Norman lives all by himself.

The final confrontation with the psycho killer Sam and Lila decide to rent a room, pretending to be a married couple. As Sam distracts Norman with some random chitchat Lila explores the house in search for her sister Marion. When Norman notices the nosy woman he hits Sam on the head and goes after her. Lila sees Norman entering the mansion and taking the stairs underneath which she is hiding.

Although she could just escape she is intrigued by the door that leads to the basement and enters. Inside she sees a person sitting on a chair facing backwards. She turns the chair around to see mother Bates stuffed corpse and she screams her lungs out. This alarms Bates who enters the room wearing a wig and a trenchcoat, pointing a knife at Lila and yelling ‘I am mother Bates!’ At that moment Sam arrives and overpowers Norman. The mansion behind the motel

Psycho is a movie every film fanatic should see at least once in his or her life. Although the movie was shot more than half a century ago, the suspense and surprise effects still work thanks to the montage and the great soundtrack by Bernard Herrmann who also scored Citizen Kane and Taxi Driver. The movie is shot in black and white because the audience at that time was not yet accustomed to see much blood and horror on screen. 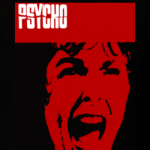