Nightcrawler or the story of a strange sociopath.

Nightcrawler is a psychological thriller from 2014 starring a lean Jake Gyllenhaal and the ever charming Rene Russo. The movie is the directorial debut of Russo’s husband, screenwriter Dan Gilroy. Set in Los Angeles the film follows stringer Lou Bloom. A stringer is a freelance photographer who sells footage of accidents and crimes to sensation crazed tv stations. The film is critically acclaimed and received Academy Award and Golden Globe nominations for the script as well as Gyllenhaal’s magnificent performance. Jake Gyllenhaal‘s best performance till this date is his portrayal of a sociopath and self-help junkie called Louis Bloom. Bloom is a charming thief who gets all his knowledge from books and the internet. Living alone in his L.A. apartment Lou goes looking for a job. Intrigued by car crashes and sensational situations, Lou asks a freelance cameraman if he’s hiring people. Unable to get a job he decides to go freelance.

The nightcrawler starts his own business Broke as he is, Bloom steals a bike, pawns it and invests in a camera and a police radio scanner. When he hears there’s action on the police radio, he emerges to the crime scene and films explicit footage. Bloom takes his work to a tv station which is always looking for spicy stories for their news show. There Bloom meets his love interest, Nina who’s in charge of the news footage. The age difference doesn’t seem to bother Bloom as Nina, played by Rene Russo, is 25 years older than him.

Unable to do everything by himself, nightcrawler Bloom hires an intern Rick who had many small jobs before. Rick, played by Riz Ahmed, has to check the police scanner and guide Lou to the crime scenes using the GPS on his cell phone. During the film, the duo’s need for sensational footage grows and they get themselves into some nasty situations.

Jake Gyllenhaal shines as a charming sociopath in Nightcrawler For his role in Nightcrawler, Jake Gyllenhaal lost twenty pounds of bodyweight to look lean and hungry, since his character is ever hungry for sensation. He also did most of the driving stunts in his red Pontiac. Gyllenhaal is very convincing as the charismatic psychopath without any moral concerns. His character seems like somebody from another time or planet, who doesn’t fit in with social conventions.

Dan Gilroy wrote and directed Nightcrawler with the intention to raise awareness about what people waste their time watching junk tv on. Gilroy previously co-wrote the scripts of The Fall, Real Steal and The Bourne Legacy.

Theatrical trailer for the thriller Nightcrawler (2014) 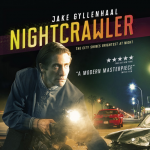