The story of Moonrise Kingdom is set on an island in New England in 1965. As usual in a Wes Anderson film, the characters seem to have jumped straight out of a comic book. His idiosyncratic way of filming creates a universe of its own and tells the viewer he or she is watching a movie unlike any other. The actual island used for shooting the movie was found through Google Maps. Sam meets Suzy , dressed up as a raven

At a field trip to the theatre, Sam runs away from his seat and ends up in the dressing room. He sees five girls dressed up as birds, preparing for the play, but Sam only has eyes for one of the birds: the raven.

The girl in the black raven suit is the redhead Suzy Bishop (Kara Hayward). Suzy looks like a teenage version of Lana Del Rey, born into a wealthy family with three little brothers. Her hobbies are listening to classical music and reading fantasy and science fiction books. She often stands on the balcony, looking through her inseparable binoculars. Scoutmaster Ward notices someone is missing

One day at Camp Ivanhoe, Scout Leader Ward notices someone’s missing at the dinner table. After inspection of the tents, Randall finds Sam’s letter of resignation, or rather a post-it note saying he’s leaving the boy scouts.

Randy also spots a hole in the tent behind a poster, a nice tip of the hat to The Shawshank Redemption by Frank Darabont. The island police is informed and a search party goes looking for the missing scout. To find the lost boy, Captain Sharp, played by Bruce Willis (with hair!), knocks on every door in the vicinity. He pays a visit to the Bishops, the unworldly lawyers portrayed by Anderson’s pet actor Bill Murray and Frances McDormand. Mr. Bishop who doesn’t have a clue that his wife is having an affair with this policeman is surprised they are looking for a boy, this far from the scouts camp. Sam and Suzy use their survival skills

When the Bishops discover their daughter’s disappearance and read the letters she received from her pen pal they put two and two together. After Sam met Suzy at the play they started to exchange letters.

At first they talk about their hobbies and their annoyances with their cohabitants. After a while however they plot on a scheme to escape their dull lives together and they meet in an open field.

Using his survival skills, Sam leads Suzy through the woods where they are confronted by several boy scouts who are looking for them. When our friends feel narrowed down Suzy stabs their opponent with a pair of scissors.One of the scouts however fatally hits his own dog with an arrow. After grieving the dog for a moment, Sam and Suzy continue their journey together. The search patrol is looking for the young couple

Meanwhile the police officer and the Scoutmaster find out Sam is an orphan, although this isn’t stated in his scouting record.

A surprising phone call from Social Services, a great small role by Tilda Swinton, informs them Sam will be put in juvenile refuge and may even receive shock therapy when he is found. A future which neither the cop or the scout want the boy to experience.

After walking through the woods and climbing some hills, Sam, Suzy and her cat arrive at a cove where they build their camp and call it Moonrise Kingdom. They catch fish, Suzy reads books aloud and they dance to Le temps de l’amour by Francoise Hardy. At this beach their feelings for each other blossom and they kiss each other awkwardly. At night they go to sleep together in their small tent. Discovery of the young couple at Moonrise Kingdom

A local elderly guide, played by Bob Balaban from Close Encounter of the Third Kind, recalls Sam’s huge interest for the nearby cove and informs the Island Police.

The search patrol arrives at the beach and finds the lovebirds asleep in their tent. Father Bishop prohibits his daughter to see Sam again and takes her home. Sam however can stay with officer Sharp since his foster parents don’t want him around any more. Sam’s fellow scouts realise they never treated their friend right and decide to help the young couple. Cousin Ben, a Scout Leader from Fort Lebanon played by Jason Schwartzman marries the pair in an impromptu ceremony.

At Fort Lebanon, Ward must resign as scoutmaster since Commander Pierce, the always brilliant Harvey Keitel, can no longer stand his incompetence and forces Randy to hand in his pocket knife.

When the nearby dam breaks and the flood hits the commander’s cabin, Ward rescues him and regains his self confidence. Officer Sharp makes an agreement with Social Services to become Sam’s legal guardian. After being struck by lightning, and nearly falling of a clock tower Sam willingly accepts this deal. Ultimately Agent Sharp helps Sam to secretly meet Suzy like he used to meet up with Mrs. Bishop.

Anderson paints a warm picture of life in the sixties, through the eyes of two twelve year olds experiencing their first love affair in this fast paced film. This is also achieved by the atmospheric soundtrack by Alexandre Desplat. The naivety, innocence and fantasy of the young teenagers is brilliantly displayed in the bright colours and the incredible way the beautiful story of Moonrise Kingdom is told. The symmetric mise-en-scène is rather remarkable and slightly reminds us of that other naive cult classic Napoleon Dynamite and Anderson’s succeeding film The Grand Budapest Hotel.

The unique director makes extensive use of stop motion techniques and handcrafted artwork just like in his other works The Life Aquatic, The Fantastic Mr. Fox and The Royal Tenenbaums. 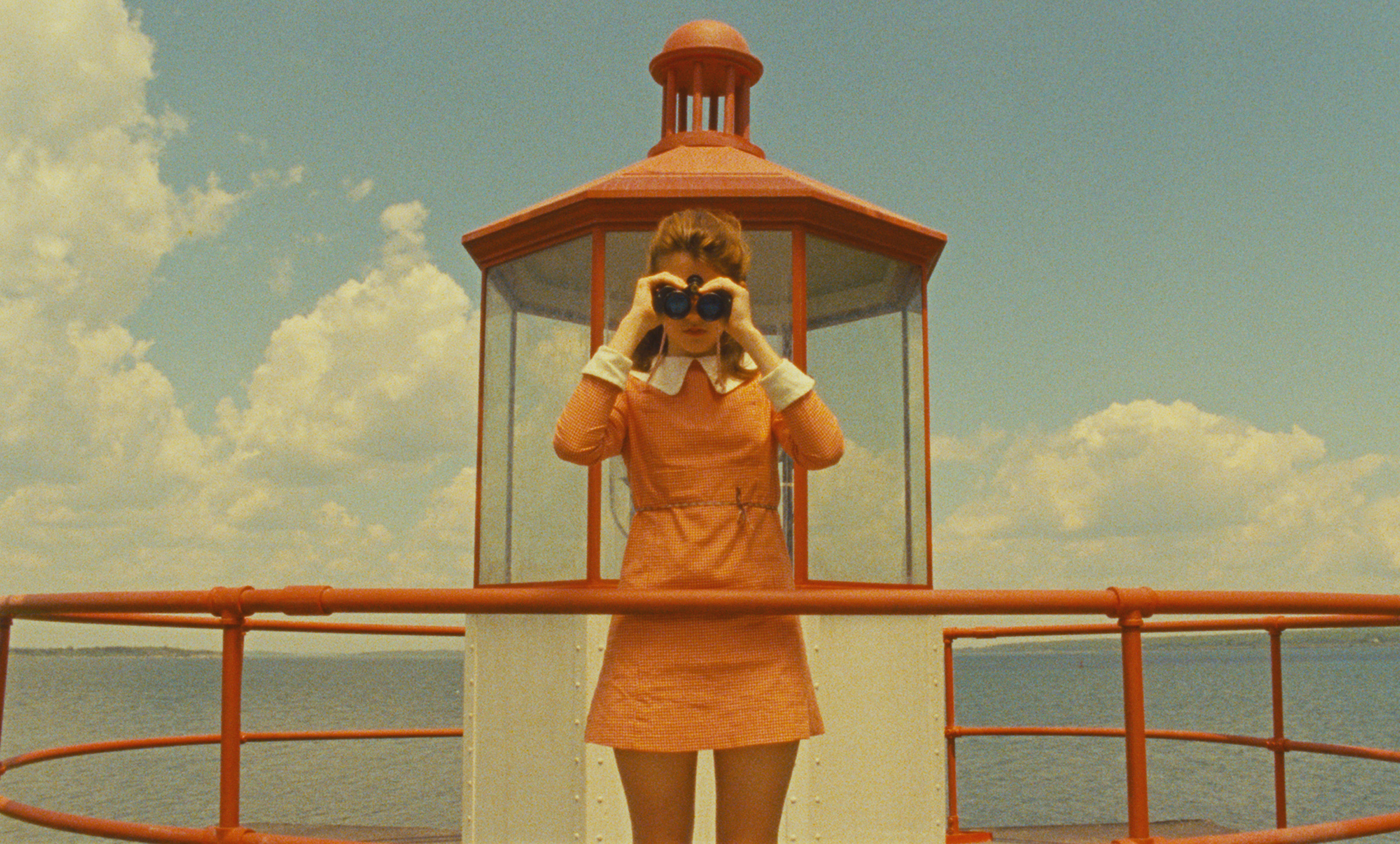