La Piel Que Habito or The Skin I Live In

What do you do when your wife commits suicide and a junk harasses your daughter? That is the question Spanish director Pedro Almodóvar asks the surgeon Robert Ledgard in the dramatic thriller La Piel Que Habito. The shocking drama of a psychotic surgeon won a BAFTA and was nominated for a Golden Globe. The Academy however forgot to nominate this masterpiece.

A servant to a family of doctors gave birth to two boys over forty years ago. The father of surgeon Robert, played by a convincing Antonio Banderas was the doctor for whom she worked. The doctor’s wife was barren and he had some sort of affair with his servant Marilia. Robert is unaware his maid is his real mother

The couple decided to keep the baby as if it was theirs. Marilia, portrayed by Marisa Paredes, was allowed to stay with the family although she had an affair with the doctor. Marilia was in fact the one who raised the young Robert who was totally unaware his maid was his real mother.

The other boy’s father ran away before ever seeing his son Zeca who grew up to be a thief and drug dealer and who flew out of the nest at a young age. Upon returning one day he ravished the beautiful Gal from his half brother, while both of the men didn’t suspect any kinship between them.

Zeca, played by Roberto Álamo, drove off with Gal but got in a severe car accident. He could flee but left Gal for dead in the burning car. Robert managed to rescue her and looked after her for months. Norma witnesses her mother’s suicide from the front row but little did suspect she would one day choose the same path to exit this world.

After robbing a jewellery store Zeca flees to his mother, wearing a tiger suit. Since there’s a carnaval in town, he can escape unseen although his face is filmed by the security cameras. After hesitating Marilia allows him to come inside, because Robert who hates him after what he did to his wife, is not at home. Zeca pays an unannounced visit to his mother

When Zeca notices a television set showing a young woman resembling Gal, he ties his mother up and starts looking for this girl.

Having found the locked door that keeps the girl inside, he demands the key from his mother. The girl called Vera doesn’t mind Zeca opening the door since this is her chance to escape the house.

However things turn out differently for Vera. Zeca catches and rapes her as he mistakes her for his ex lover Gal. When Robert arrives at the house and sees the couple copulating on his security monitors he runs upstairs and shoots Zeca. After Robert buries the body you could imagine peace would return to the house but we wouldn’t want the movie to end after fifty minutes would we?

Flashback to a traumatising evening

At night Robert feels like making love to Vera who is allowed to sleep in his bed at last. Vera however says she still suffers from Zeca’s aggression. As they fall asleep Robert thinks about some occurrences which happened six years earlier. Robert and his twenty year old daughter attend a party at a mansion. At some point several youngsters leave the house after taking drugs.

Norma is accompanied by a player called Vicente who while being high himself notices Norma is drunk and decides to take advantage of her. When Norma realises this she screams and surprised by her reaction Vicente beats her and leaves her in the garden.

Noticing the disappearance of his daughter, Robert takes a walk in the garden an discovers Norma’s shoes. When he finds his daughter who starts to scream as she sees her father, Robert sees a scooter passing by. Norma is in shock and interned in a hospital. When Robert visits her she crawls into a closed as she thinks her father is the one who harassed her.

Bent on revenge, Robert finds the motorcycle and follows the man as he drives off. In a deserted forest, Robert hits the scooter which falls down together with its driver. The next day Vicente wakes up in a cave, his hands tied together. After a couple of weeks living on water and dry bread, Vicente cracks and he has no clue why he is captured. Vicente threatens to cut his own throat

Suddenly Vicente wakes up on an operation table unaware of why he is there. Robert tells him he technically made a woman out of him. He also explains this is some kind of revenge for harassing his daughter who has jumped to death out of the window, just like her mother.

For the next months Robert continues to perform surgery on Vicente until he finally looks like a girl and he decides to call her Vera. Unhappy with his or her situation, Vera tries to escape. Robert manages to lock the doors using a remote control to keep Vera inside.

She threatens to cut her own throat as she rather dies than live on like this and although Robert thinks it’s just some bluff, Vera cuts herself. As a surgeon Robert succeeds in rescuing her and says ‘We got lucky’.

After several months Vera’s hair has grown longer and she looks like a real woman. As she shows good behaviour, Robert decides she is allowed to live in the house and not just spend her days locked up in her room. His maid Marilia disapproves and warns him but Robert insists. He even suggests the two women should go shopping, because Vera always wears some kind of skin coloured jump suit inside the house. In the ladies’ absence, Robert receives a visitor. A colleague who helped him perform the initial surgery on Vicente enters his office. He holds a newspaper that says Vicente is missing for six years and his mother is still looking for him. He also suggests Robert kidnapped the young man to perform sick operations.

The same moment Vera arrives and she has heard part of the conversation. She reassures the visitor that she is no experiment and that she was born a girl. The man leaves and Robert is relieved that Vera didn’t betray him. Robert falls in love with his own creation

At night, the two go to bed and Robert is once again ready to make love to his transsexual creation. Vera still isn’t fully recovered from the damage Zeca caused to her and she goes downstairs to fetch some lubricant she bought in the afternoon.

At least that’s what she tells Robert. She goes to his office and sees her old picture as Vicente in the newspaper. Vera knows there’s a gun in Robert’s drawer and takes it upstairs.

Robert is surprised his love threatens him with a pistol and she shoots him in cold blood. As Marilia hears a gunshot, she enters the room and sees Robert lying in bed, covered in blood. Vera who hid under the bed then shoots Marilia and escapes. Upon arriving at the clothing store of her mother she is not recognized and has a hard time explaining who she really is.

A Spanish movie that grabs you by the throat

La piel que habito is a unique R-Rated movie because of the disturbing content of the film and some nudity. At the end of the film several loose ends are tied together and the jigsaw puzzle is completed.

This is a typical example of a movie you have to watch two times. The first time the element of surprise is the greatest asset of the film. The second time around however you notice the details that suggest Vera used to be a man. A great Spanish movie for every cinephile but not appropriate for children. 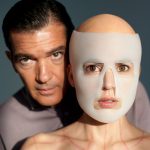