The Karate Kid or Rocky for teenagers

In 1984 John G. Avildsen, the director of Rocky gave us The Karate Kid. This teenage drama about a young boy’s road to success in the world of martial arts reminds us of the Sylvester Stallone classic by the same director that was released almost a decade earlier. This time around, Alvildsen tells the from zero to hero story in a high school setting in this family movie. Daniel moves with his mom to a lousy apartment

Daniel, a seventeen year old kid played by the then 22 year old actor Ralph Macchio, moves from New Jersey to California because his mother found a job there. While the single mom Lucille is looking forward to build a new life in the Sunshine State, her son would rather stay in Newark.

His mother promised Daniel they would move to a beautiful place with a swimming pool but they end up in some dump in Resada, Los Angeles. While moving in, Daniel is invited to a beach party by a guy from his apartment complex who disappears from the movie after this event. Daniel is in trouble at his first beach party

At this beach party Daniel meets a pretty cheerleader called Ali, played by Elisabeth Shue who later starred in Cocktail, the Back to the Future sequels and Leaving Las Vegas.

After a while Ali’s ex-boyfriend shows up and he and his biker gang start to look for trouble. Daniel intervenes in the quarrel and of course he gets his butt kicked by this guy called Johnny.

Back home his mother notices his black eye as she orders him to take off his sunglasses. Daniel lies and says he fell with his bike not to upset his mom. At soccer practice at school, he gets in a fight with Johnny again and bites the dust once more.

I learned it from a book The dojo where Daniels nemesis is trained by the strict sensei

At the apartment Daniel is practicing karate from a book but fails to make progress. In downtown L.A. he notices a karate school and he has a look.

He sneaks into the dojo and watches a karate lesson where he sees a strict karate teacher drilling his pupils. Enrolling in this dojo is out of the question since they can’t afford it and his enemy Johnny is one of the top students there.

When driving around at night, Daniel is bullied around by Johnny and his biker gang. They push Daniel with his bike down a hill. Upon arriving home, Daniel is frustrated and he throws his brand new bike in the garbage bin. His mother is far from pleased.

The next day Daniel finds his bike in perfect condition standing in the hall way. Mr Myagi, the Okinawan janitor who catches flies with chopsticks, has repaired the bike at no cost. The part of Mr. Myagi earned Pat Morita an Oscar nomination for best supporting actor and became part of pop culture. Daniel has no intrest in being seen at the school dance so he dresses up as a shower, with a shower curtain. Ali knows the person in that weird outfit can only be Danny so he invites her in his shower curtain to dance.

In the bathroom Daniel decides it’s payback time and he puts a hose over the bathroom wall of the stall Johnny is in and opens the faucet. As he runs away, Danny is chased by Johnny and his gang who are all dressed up as skeletons. Daniel gets a beating by Johnny and his gang

When Danny reaches a fence the boys get him and kick the crap out of him. One of the skeletons says Danny had enough and learned his lesson, but Johnny decides not to show mercy. To everyone’s surprise the elder Mr. Myagi jumps over the fence and beats every single one of them.

That night Daniel is surprised that he survived the skeleton attack and wonders who saved him. Daniel is dumbfounded when he finds out Myagi’s karate tricks saved him and the Japanese janitor soon becomes a mentor for Daniel-san. Myagi teaches him karate is for defense, not for fighting and that bad attitude is the blame of the teacher, not of the pupil.

In the lion’s den

The two pay a visit to the dojo with the strict sensei where Johnny has learned karate. The sensei wants to settle this rivalry once and for all and wants Johnny and Daniel to fight a decisive battle. Mr. Myagi agrees but wants the fight to be held on common ground, at the karate tournament in two months under one condition: no one fights Daniel until the tournament. Daniel’s new mentor starts the training with a rather unorthodox practice. Danny’s first task is to wash and wax all the cars with both hands. “Wax on, wax off” repeats Mr. Myagi in his now legendary quote.

Daniel-san clearly doesn’t understand why he has to do all this chores like painting Myagi’s fence but his mentor claims it’s all part of his training. Mr. Myagi tries to catch a fly with chopsticks

The day after Daniel has to paint Myagi’s entire house and is pissed because he’s been busting his ass of for four days instead of learning karate, which he needs for the tournament. When Myagi explains the movements for painting, scouring and waxing on are excellent defensive karate movements to block attacks, Daniel sees the light. One day Myagi goes fishing and Daniel accompanies him. While Myagi sits in his boat, Danny stands on the edge of the boat practicing his karate kicks.

When Danny asks his mentor when he finally is going to learn how to punch, the laconic answer is “Learn how punch, after you learn how keep dry!” and Myagi rocks the boat so Danny falls into the water.

At a fancy party one night, Daniel catches Ali dancing with Johnny because her parents want the to get back together. When Johnny notices Daniel is looking from a distance he starts to kiss Ali against her will and Daniel walks away, feeling defeated. He doesn’t see Ali’s reaction as she pushes Johnny away and slaps him in the face.

One night, Danny finds Myagi in drunk condition, celebrating someone’s birthday. Myagi tells Daniel his wife died a long time ago while pregnant of their child which somehow explains why Myagi is a lonely man focused on silence. Daniel and Ali get back together

Upon obtaining his driver’s license Mr. Myagi gives Daniel a car to his choosing as a gift for all his efforts. He meets up with Ali and talks about the night he saw her kissing Johnny.

Ali comes from a better neighbourhood so her parents don’t like her hanging around Daniel and this bothers him. But they make amends and get back together. Mr. Myagi and Ali support Daniel at the tournament

Later at the tournament Daniel is supported by his coach Mr. Myagi and his girlfriend Ali. After a slow start Danny begins to grow in the tournament.

Johnny’s sensei notices Daniel has a chance to win the tournament and he orders one of his guys to injure Daniel. This of course leads to the disqualification of this boy but if Daniel can’t return to the game, Johnny wil be the winner by forfait.

Mr. Myagi uses an ancient Japanese trick and rubs his hands together to hels Danny recover. To everyone’s surprise Danny doesn’t give up and decides to fight the final battle agains Johnny. When Danny leads by two points, the ruthless sensei orders Johnny to aim for his weakened leg.

At the score of 2-2 Johnny hurts Danny’s leg so he has to stand on one leg. This is the ultimate moment to try out Mr. Myagi’s famous crane bird shot he saw Myagi performing on the beach one day.

As Johnny approaches him, Daniel-san kicks Johnny in the head and wins the championship. The movie ends here without an epilogue or conclusion.

The Karate Kid tells the classic hero’s journey in which our hero is called to action, refuses his calling but suddenly meets a mentor who helps him achieve his goal. The music by Bill Conti is not as memorable as the soundtrack he wrote for Rocky. 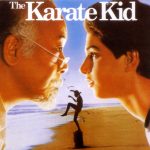