Before Javier Bardem and Penélope Cruz became Hollywood’s favorite European acting couple, they both played in the Spanish movie Jamón, Jamón. You might know the film as A Tale of Ham and Passion as it is called in the United States. In Germany it is known under the übersubtle title Lust auf Fleisch. The movie is the first part of the late director Bigas Luna’s Iberian Trilogy as well as the debut of the then eighteen year old Penélope Cruz as Silvia, hija de puta, or daughter of a whore. In the movie of course, not in real life! Penélope Cruz as Silvia on the run.

This erotic comedy begins in an underwear factory in the Spanish city Zaragoza, where Raul (Bardem), or at least the lower half of Raul, is auditioning for a commercial poster for undies under approving eye of the company owner Conchita. When her son, José Luis (Jordi Mollà), a daddy’s boy with mommy issues finds out his girlfriend Silvia (Cruz), who happens to work in his parents’ factory, is pregnant, the young couple decide to get engaged. Since Silvia is not only one of her lower class seamstresses, but also the daughter of the local prostitute whose brothel both José Luis and his father like to frequent, Conchita is not going to allow her to marry her son. In an attempt to convince Silvia to change her mind, Conchita hires the butcher and wannabe bullfighter Raul to seduce her, so she can forget all about José Luis. At first the tough testosterone jockey does not at all seem to impress the sensitive girl, but instead succeeds in driving Conchita completely crazy about him. When Raul, who promises Conchita never to see Silvia again in return for a motorcycle, later on acts in a more subtle way, the shy Silvia eventually falls for him, as was Conchita’s initial wish. Driven by extreme jealousy, both Conchita and her son follow the two lovebirds to their nest only to see them passionately making love in a way they never experienced with the protagonists. Upon seeing his fiancée with another hombre, José Luis decides to kill his rival. His mother on the other hand takes less drastic measures and tries to win back Raul’s. When José Luis finds comfort with Silvia’s mother and his father can’t help but kissing Silvia, the supposed couples seem to have mixed up in a rather unexpected way because upon his arrival at Raul’s place, he is surprised to find his opponent in bed with his own mother instead of with his former girlfriend. Silvia knows her fiancé is out to kill her loverboy and the padre drives her over to Raul’s hideout to prevent the murder from happening. Meanwhile Junior has lost his temper and attacks Raul with a stick who replies by hitting the skinny boy with a large ham until his enemy stops moving. The closing scene shows three odd couples finding comfort in each other’s arms. In their fear of losing their son when he would marry the daughter of a prostitute they end up losing him entirely and forever. Although the serious consequences, the movie is rather comical but not ha-ha funny and also explicitly sexual. An entirely useless though amusing scene shows Raul and a friend in a nightly, butt naked bullfighting game and Penelope Cruz only appears with covered up breasts for about fifteen minutes in the entire film. Fortunately she also displays her acting talent which almost two decades later earned her an Academy Award for her role in Woody Allen‘s Vicky Christina Barcelona. 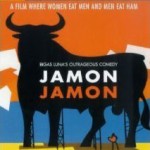