In the fifties our image of space travel and life on other planets was very different from now. Years before man had explored outer space and landed on the moon the film Forbidden Planet was released. Ten years prior to 2001: A Space Odyssey and over twenty years before the Star Wars saga began Fred McLeod Wilcox gave us Forbidden Planet. This 1956 film was the origin of many space clichés and was nominated for the Oscar for best special effects.

A flying saucer containing a crew of young soldiers wants to land on a distant planet called Altair. They establish radio contact with professor Morbius (Walter Pidgeon), who arrived there twenty years earlier along with several other scientists. The patrol’s mission is to find out if there are any survivors of this previous expedition but to their surprise Morbius asks them to return home without landing.

Not welcome to the Forbidden Planet

After insisting the saucer that looks like a typical UFO lands in a desert. The crew members are welcomed by the slow polyglot Robby the Robot. This walking household appliance who seems to have escaped from a Jetsons episode drives three of the men to Dr. Morbius house. How he managed to build this house without any contractors or carpenters in the vicinity remains a mystery. The crew meet Morbius, Altaira and Robby the Robot

Morbius explains to the astronauts that he is the sole survivor of the expedition and is very keen on his privacy. The rest of the scientists died in a mysterious way but he and his wife seemed to be immune. Alas she also passed away a couple of years later by natural causes.

To the men’s surprise and joy they are introduced to Altaira, Dr. Morbius’ attractive daughter played by Anne Francis. After being locked in a spaceship for over a year, the three men don’t hesitate to woo this naive girl who`s never been kissed before.

Altaira and her father live in a futuristic house with a swimming pool and an idyllic garden where gazelles and tame tigers run around. Their house robot Robby obeys to their every command but is programmed not to kill anyone. You could say he’s the opposite of a terminator. Apart from making coffee and sewing clothes, Robby is capable of analysing and reproducing molecules of whatever he’s given. The space ship’s cook asks him for some whiskey and Robby produces 60 gallons for him in no time. The invisible creature passes through the shield

When an invisible creature seems to have intruded the space ship, the cabin personnel deploy an electrical shield around the flying saucer. A cool scene with typical old school synth effects shows us how the invisible menace leaves its footprints in the dirt and on the stairs. Linking the recent casualties with the death of the scientists twenty years ago, Commander Adams goes to see the professor.

An ancient but advanced civilisation

At Morbius’ house the men get the clear instructions by Robby not to disturb the professor while he’s in his study. So Adams, played by a young Leslie Nielsen before his hair was white, decides to go hit on Altaira who’s skinny dipping in the pool. When their patience has been tested long enough, the men enter the den which is empty. Morbius arrives from another door and decides to show the men his secret.

For years Morbius has been studying the remains of an ancient culture called the Krell. This civilisation seems to have been superior to mankind in almost every way. However all of a sudden it disappeared completely. This explains why Morbius didn’t want any nosy intruders to disturb him from his work and from his peaceful existence on the planet.

Among the Krell artefacts Morbius found a dangerous device to expand your brain capacity. Only people with a high IQ could use it to further increase their brain power. Inferior creatures would not survive the treatment. Another alien device allowed the Krell to create molecules based on their thoughts. In other words, what they imagined would appear. Forbidden Planet is a typical fifties science fiction movie, in Technicolor of course! All usual elements are present: the mystery of outer space, the mad professor, the helpless woman, the courageous hero, the comic relief, the advanced technology and the intangible villain.

Although the plot is loosely based on The Tempest by Willam Shakespeare, the dialogues are not worth remembering. The fifties sound effects are still cool while the analog synthesizer music seems very dated. The visuals and special effects are still very enjoyable today as for Leslie Nielsen, it’s weird to see him in a more serious role than The Naked Gun of Airplane! 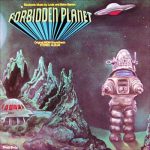