Imagine Dumb & Dumber in the universe of Trainspotting. This could be the tagline of the raw Belgian movie based on the novel Ex Drummer by Herman Brusselmans, whose sarcastic dialogues are conserved in the film. Director Koen Mortier displays the differences between the sophisticated life of a wealthy writer and the lower class losers he mingles with in this funny Flemish R-rated film.

The opening credits played in reverse immediately set the tone of this absurd movie. We see three men riding their bikes backwards and split up, whilst actually they meet up and join each other. Meanwhile the names of the cast and crew are projected on several locations in Ostend, like the frame of a bike, the name on a doorbell and the advertising on public transport. The Feminists is a band consisting of three disabled retards

Three band members who are looking for a drummer decide to ask famous writer Dries Vanhegen, loosely based on Brusselmans, to join them. They all have certain peculiar disabilities: the bass player can’t bend his arm, the guitar player is nearly deaf and the singer has a severe lisp. Although he is disgusted by these lowlifes, the writer decides to joins the band as a social experiment so he can write a novel about his experiences later on. Dries levels with the retards and starts manipulating them. Jan (Gunter Lamoot), whose obese mother clearly wears a wig and has an affair with the singer is an easy target because he is easily agitated. His father is locked up in his room, wearing a straight jacket which intrigues Dries and at the end of the movie he decides to give Jan’s father his freedom back.

As The Feminists enter a music contest, they are informed that a competing band intends to perform a song with the same title as their new song. To avoid this, Dries has a chat with the singer, who turns out to be an old friend from college and now lives in a trailer park. He convinces Big Dick (Jan Hammenecker) by writing him a new biographical song called The Biggest Dick in Town which he is allowed to use at the contest. Dikke Lul having a blast with Jimmy the roadie.

Big Dick‘s reputation is confirmed when his wife shows Dries the havoc her husband caused down there. In a weird scene we even see the two of them walking inside her ladyparts. Jimmy the homosexual roadie (Wim Willaert) is rather curious when he hears about Big Dick‘s member and allows him to sodomize him in the men’s room of a bar. Someone released the blood crazy father.

After winning the contest, the challenge is over for Dries and he leaves the Feminists, so he is now technically an ex drummer. While the band has a gig, Dries decides to release Jan’s crazy old father(François Beukelaers) and hand him his gun. When the band members arrive, no one survives the old man’s killing spree. But although they’re dead they are interviewed separately and relive their last moments in front of the camera.

Ex Drummer could be considered the Belgian answer to Trainspotting. Just like in Danny Boyle‘s masterpiece Mortier shows us drunk junkies living in their own trash who lose their baby of malnourishment. The dialogues in Ex Drummer are extremely funny and make up for the story which does not really go anywhere. A running gag is Dries asking several people at any given time where they were when they heard King Baudoin died. 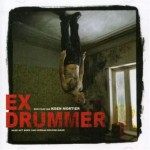