Easy Rider is a psychedelic musical road movie that is unmistakably made in The Summer of Love in 1969. The movie was written, produced and directed by the main actors Peter Fonda and Dennis Hopper. This counterculture film did not remain unnoticed and was nominated by the Academy for Best Original Screenplay and Best Supporting Actor for the young Jack Nicholson.

Two young freewheelers smuggle some cocaine across the Mexican border into the United States. In Los Angeles they meet at an airport and sell the drugs to a connection of theirs, played by famous record producer Phil Spector. He gives them a large amount of money which they hide in a rubber tube in the fuel tank of a chopper.

Captain America and Billy the Kid The two young bikers look very different. Wyatt, the tall man portrayed by Peter Fonda is dressed in a biker outfit with the American flag on his leather jacket, his helmet and his motorcycle. Therefore his nickname is Captain America, named after a popular Marvel comic book hero.

The shorter man with the long hair is Billy, played by director Dennis Hopper. This man’s dressing style could best be described as that of a rough Native American. Billy turns out to be less of a people’s person and more suspicious when he meets strangers. Captain America and Billy the Kid

A large part of the movie consists of the two bikers driving around on their motorcycles across the Midwest. These long scenes often show the hot summer sun shining across the stretched landscape. As they drive around, the bikers are accompanied by great sixties music by The Doors, Jimi Hendrix and of course Born To Be Wild by Steppenwolf.

At some point our freewheeling friends stop at the house of a midwestern family and join the dinner table of the caucasian man and his Native American wife and mixed children. This scene however is of no use at all for the film.

The hitchhiker’s guide to the Midwest The bikers pick up a hitchhiker on their trip

While driving around, Captain America and Billy the Kid pick up a hitchhiker. The man is grateful for getting a ride and pays the men for gas. Suspicious Jimmy is afraid that the hitchhiker will find the money in their fuel tank as he’s filling up their tanks at the gas station. Wyatt reassures Billy that their live savings are safe for the mysterious hitchhiker.

The three men drive around for a bit and when the night falls they stop to make a campfire. The conversations around campfires are another recurring element in the film. When the guys ask the hitchhiker where he’s from he refuses to answer. After a while Billy gets pissed because of this and the hitchhiker just responds that he wants to be away from the city.

No room in the inn The next day the fellowship arrives at a commune where the hitchhiker lived for a while. A couple of women are immediately interested in the newcomers. However the men say there is no room for newcomers. Wyatt and Billy hang around for a while and eat together with the other hippies. After skinny dipping with two girls they leave the commune since they can’t stay there.

The bikers arrive in a town where a brass band is marching down the streets. Just for fun the two guys join the parade and walk along. To their surprise they get arrested for parading without a permit.

Get out of jail free In jail our friends meet a lawyer

In jail they meet George Hanson, a great performance by the young Jack Nicholson. Hanson is a lawyer who, not for the first time, spends a night in jail because of drinking. He knows the cops and manages to get Billy and Wyatt out of the slammer. As they are about to say goodbye, they ask Hanson to join them and he doesn’t see why not.

The three men drive around with George Hanson sitting on the back of Wyatt’s USA themed chopper wearing a football helmet. At the next campfire the men get George in touch with marihuana for the first time. After smoking some weed the guys talk about ufo’s and other crazy stuff.

A not so warm welcome

The next day the trio stops at a diner. As they enter everybody stares at them and starts to talk about them. Two rednecks say they don’t need these kind of people around here. The cops think about teaching them a lesson. Only a group of girls seem to like the three bikers. Feeling less than welcome, the three men take off. Wyatt, Billy and George Hanson are on the road again

At yet another campfire at night, George brings up the incident at the diner. He says people are afraid of them because they, the  bikers, represent real freedom. People think they’re free but actually they are stuck in the system. However they won’t allow anyone to say they aren’t free without being offended.

At night our fellowship is asleep in the open air at their campfire when they are cowardly attacked by two of those so called free men who were at the diner. George is clubbed to death and Wyatt is badly injured.

There is a house in New Orleans The two bikers move on and arrive at a brothel in New Orleans. When two ladies of the evening join them, Wyatt is not quite in the mood because of the sudden death of his friend George. Instead of doing what is expected at a bordello, the men decide to go to Mardi Gras with the girls.

To forget the incident, the four youngsters slip some LSD and start tripping. In a psychedelic scene we see them making love at a cemetery and almost lose their mind because of the drugs.

The road trip comes to an end

At the final campfire in the movie, while smoking jet another joint, Billy is delighted because they made it. They are rich and ready to retire in Florida. Wyatt however, still shocked by the death of his pal George, says they blew it. On the road two hillbillies in a truck come driving next to Billy. The redneck on the passenger side suggests him to get a haircut to which Billy silently replies by flipping him the bird.  The country boy overreacts slightly by shooting him with a shotgun.

Wyatt returns to put his jacket over Billy and flees to get help. The hillbillies turn around and decide not to leave any witnesses. In a cool sequence we hear a gunshot and see Wyatt’s motorcycle flying through the air. His gas tanks explodes so their hard earned cash will never be found.

Why should I see Easy Rider?

Good question, thanks for asking! Although Easy Rider was revolutionary back in the late sixties, the film is kind of slow according to our current norms. The film stepped away from the conventions of the noir films that were popular in the fifties and sixties and opened the doors for the New Hollywood of Spielberg, Scorsese, de Palma and Coppola. One of the many campfire scenes in the movie

Movies containing this much violence, sex, drugs and rock and roll music were very rare at the time. Director Dennis Hopper experimented with lots of psychedelic transitions between scenes and story containing a message of freedom and the opposition it was confronted with were new at the time.

Although the only actor that performs above par is Jack Nicholson, his effort alone is a good reason to watch the film. The plot may seem thin as the movie is filled with shots of the men driving their bikes and holding long conversations around campfires but the message it brings is still worth viewing this classic film. 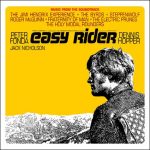